Dr.Tamer Mobarak
Last update :
Chronic renal failure ( CRF)  will be discussed in this article concerning definition , Stages , Causes and clinical picture of the disease .CRF will be continued soon in another article which discusses the investigations and treatment methods of it .

Definition
It is a gradual slowly progressive (within years) irreversible deterioration of kidney function with development of the clinical syndrome of uremia
(Progressive course of ongoing loss of kidney function).
Finally it progresses to end stage renal failure.
DD from Acute renal Failure : here 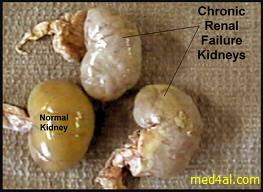 It is a stage of C.R.F. at which kidney function cannot sustain life.So replacement therapy is indicated (dialysis or transplantation).

- Bleeding tendency due to :
. Capillary fragility.
. Thromboasthenia due to the uraemic toxins.

1. Pericarditis ;
- uremic toxins are very irritant to pericardium. It is a feature of severe preterminal uraemia or inadequate dialysis. It usually resolves with intensive dialysis.
- Haemorrhagic pericardial effusion with the danger of pericardial tamponade may occur so, anticoagulants should be used with caution.

2. Insulin is catabolized by and to some extent excreted by the kidney so insulin requirements in diabetic patient with renal impairment will be decreased.

7. Impaired mineralization also occurs with aluminium toxicity due to phosphorus binders containing aluminium or as a result of exposure to aluminium in water source used to make up dialysate fluids for hemodialysis. 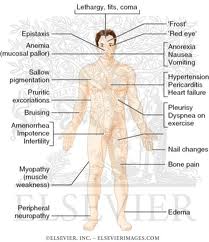 2. Color (earthy look), it is a mixture of 3 colors :
- Yellow : due to urochrome pigment retention.
- Pallor : due to anemia.
- Increased melatonin.

3. Recurrent pyogenic infections.
4. Urea frost : whitish powder on the skin surface (another cause of itching)
5. Bronze color due to naornostdrosis.

i- Acid base & electrolytes
1. Ca decrease , p increase and AI increase  (excreted through the kidney).
2. Hyperkalemia (excreted through the kidney).
3. PH drop  (metabolic acidosis due to H+ retention).
4. Na and water retention with normal sodium level, hyponatremia may occur due to excessive ingestion of water,
- hypernatremia is infrequent in chronic renal failure.

1. Manifestations of the cause as UTI, renal stones.
2. Early polyurea and nocturia due to irn aired concentrating ability .