Ulcers | Examination, Defferential Diagnosis and how to diagnose

Dr.Tamer Mobarak
Last update :
This is a detailed tutorial about how to diagnose a patient with ulcer. This approach leads you to reach a final diagnosis and to put the plan of management. 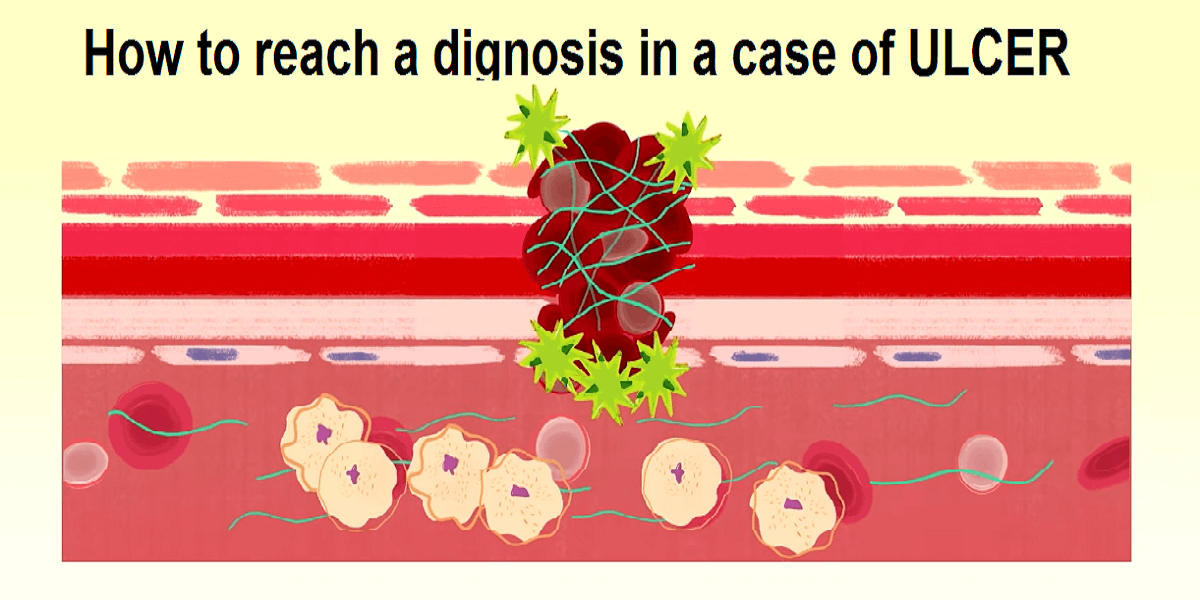 1.Duration : This is short in acute ulcers and long in chronic ulcers. In venereal ulcers, inquire about the incubation period : 3-4 weeks in syphilitic chancre and 3-4 days in soft sore (chancroid).

2. Mode of onset: Inquire whether the ulcer has followed trauma (wound or burn) or has arisen in a previous local lesion. (.g. papule, Jump, callosity or patch of dermatitis.

3. Pain: Acute ulcer and tuberculous ulcers are painful whereas syphilitic ulcers and trophic ulcers are entirely painless.
Pain in absent in the early stages of rodent ulcer and epithelioma.
4. Discharge: Whether serum, pus or blood.

5. Progress: Whether spreading, stationary, healing or showing remissions and exacerbations. Inquire about any constitutional symptoms, such as fever and rigor, and about the effect of any treatment so far received.

1. Simple ulcers are due to direct destruction of the skin by trauma, heat or chemicals, supplemented by infection with pyogenic organisms. The clinical features of the ulcer depend ()1 its pathological state, i.e. whether spreading, healing or callous.

2. Varicose ulcer: A callous ulcer typicall situated on the medial side of the lower third of the leg (ulcer-bearing area) and surrounded by pigmentation, eczema and dermatitis. The Presence of varicose veins in the leg and thigh confirms the diagnosis.

3. Trophic ulcers: are due to prolonged pressure on denervated or devitalized skin. They occur most often on the back of bed-ridden patients (bedsores) and the soles of ampulant Patients (Perforating ulcers).

4. Tuberculous ulcers: may develop in relation to any tuberculous structure, such as a lymph node, a bone or a joint. The ulcers aro small, painful and irregular. Their edges are thin, bluish and undermined and the floor is pale and covered with feeble granulations. The base is soft and the discharge is thin and watery with flakes of caseous material.

5. Syphilitic ulcers may occur in any stage of the disease.
6. Soft chancre (sore) : A venereal disease due to the bacillus of Ducrey. After a short incubation period (3 or 4 days), a vesicle appears and breaks down to form an ulcer about a week after infection. The ulcers are multiple and painful with oedematous edges, yellowish slough and copious purulent discharge. The regional glands are enlarged and inflamed with extensive suppuration and periadenitis (buboes).

7. Oriental sore : A specific granuloma of the skin due to Leishmania tropica which is transmitted by the sand fly. The ipcubation period is variable and may extend up to several months after exposure. The lesions may be multiple or solitary and usually occur on exposed parts of the body. A small itching nodule appears, grows slowly and ultimately ulcerates. The ulcer slowly enlarges, discharg-ing a scanty serous fluid which becomes inspissated to form a crust beneath which the sore extends. Diagnosis is estab-lished by puncture at the margin ; Leishrnania Donovani bodies will he found inside large macrophages.

8. Rodent- ulcer occurs usually on the upper part of the face in middle-aged subjects, especially males. It arises as a firm red papule which breaks down to form a rounded ulcer with a red granular floor, an indurated base and a regular clearly-cut or rolled in beaded edge. The ulcer extends slowly and erodes the underlying tissues including car-tilage and bone. The lymph glands are never affected by metastases but may be en-larged from secondary infection.

9. Carcinomatous ulcer (epithelioma) often develops on the top of a longstanding precancer-
ous lesion such as an ulcer, burn scar or wart. It may take the form of an elevated crater or a deep excavation. The ulcer has an irregular contour with raised everted nodular edges and an irre-gular floor composed of necrotic material or haemorrhagic tumour tissue. The base is typically hard and indurated and is often fixed to the deeper structures. Involved lymph nodes are hard and mobile and later fixed to the deeper structures.

10. Sarcomatous ulcer is due to stretching and pressure necrosis and not to neoplastic invasion so that the ulcer lies on the top of a bulky fleshy vascular tumour mass. The floor consists of fungating tumour tissue and the edges are thin and undermined and not indurated. The surrounding skin is congested and the seat of dilated veins is not adherent to the underlying tissues so that a probe can be inserted between the skin and the tumour mass at the edge of the ulcer. The regional glands are not affected but distant metastases are common.
Edit This Article
Tags General Surgery