Dr.Tamer Mobarak
Last update :
This article is to discuss Cystic fibrosis, which is a congenital disorder , also named Congenital polycystic lung or mucoviscidosis .We will discuss its definition, pathogenesis, clinical picture, investigation and management .


What is meant by Cystic fibrosis ?

Definition : it is a congenital disease that affects multiple systems ,mainly the lungs , digestive system, sweat glands, and male fertility .
The name "Cystic fibrosis" derives from the fibrous scar tissue that develops in the pancreas, one of the principal organs affected by the disease . 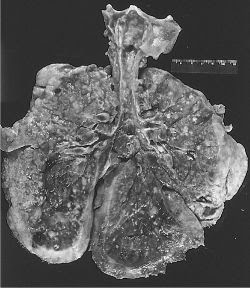 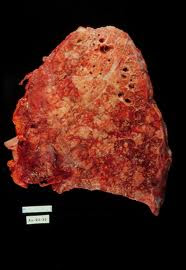 Pathogenesis and causes of Cystic fibrosis

• There is a change in the viscosity and tenacity of mucous produced at epithelial surfaces.
• The disease includes mainly bronchopulmonary infection, pancreatic insufficiency and biliary cirrhosis with high sweat sodium and chloride levels.
• it is an autosomal recessive inherited disorder with gene mutation on the long arm of chromosome 7, producing abnormal membrane transport protein called cystic fibrosis transmembrane regulator (CFTR) leading to decreased chloride excretion into the airway lumen and increased reabrorption of sodium into the epithelial cells .
So, less excretion of salt leads to less of secretion of water ==>  increased viscosity of secretions.
• Also, there a CFTR independent mechanism of chloride secretion in the sweat glands with impaired reabsorption of sodium chloride in the distal end of the duct
leading to increased salt content of sweat.

What are the organs affected in cystic fibrosis ? 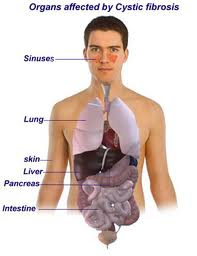 How to diagnose cystic fibrosis ?

• The lung is the target organ of this systemic disease, it gives a picture similar to bronchiectasis plus extrapulmonary manifestations .
• Cystic fibrosis now is recognized as the most common cause of obstructive airway disease among individuals up to age 30 years.
The median age of the disease has risen from teens in 1960 to 30 years in 1998 .

Clinical picture
1- Pulmonary manifestations:
• The earliest pulmonary manifestation is peripheral airway obstruction due to plugged bronchi,
• Repeated bouts of infection lead to a cycle of obstruction and tissue damage.
The predominant organism to colonize the lung is pseudomonas. Intial infections may be due to staph aureus.
• Many patients develop sinusitis and nasal polyps, clubbing of fingers.

(A) In early stages of the disease, therapy must be individualized according to specific clinical manifestations:
(1) Salt depletion is a potential problem in warmer climates.
(2) Blocking of Na reabsorption with amiloride or stimulating chloride secretion with adenosine improves hydration of secretions.
(3) Nutritional supplementation and pancreatic enzyme replacement and vigorous treatment with parenteral antibiotics, hydration, humidification and supplemental oxygen.

(B) In the late stages, therapy is aimed at suppressing infections with antibiotics,post drainage and O2 therapy. Dornase-a. is a drug that makes sputum less viscid. Aerosolized tobramycin has demonstrated improved pulmonary functions .
(C) In end stage disease, bilateral lung or heart-lung transplantation is the procedure of choice.
Edit This Article
Tags Respiratory-diseases