Dr.Tamer Mobarak
Last update :
Portal Hypertension occurs due to various causes (discussed) , and when it occurs , the body tries to compensate and decrease the portal pressure by opening of Porto-Systemic shunts leading to the formation of Varices at the following sites :


- They develop as anastomosis between Left & Short Gastric veins (Portal ) and Azygos vein (Systemic) .
-These Varices may rupture causing Haematemesis or Melena ,, and my cause bleeding per rectum in severe cases .

- In cases of mild , repeated bleeding in these varices , the patient develops Anemia .


- They may be Asymptomatic , but they have to be searched for by investigations in every case of liver cirrhosis in order to take prophylactic measures to prevent the first bleeding e.g Bandage . 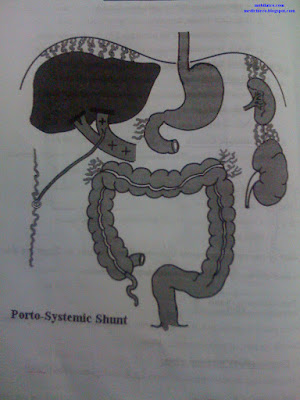 - They have Low incidence of bleeding .

3. Recanalisation of the Para-Umbilical vein

-The Para-Umbilical vein  is present in the round ligament of the liver .
- It connects the left Portal with the superior and inferior epigastric veins .
- Opening of this anastomosis will lead to development of Dilated veins radiating from the umbilicus which is called " Caput Medusa "  and it will also cause a soft murmur to be heard between the umbilicus and Xiphisternum "Venous Hum " .

-  Detected by  Ultrasonography or during operation .