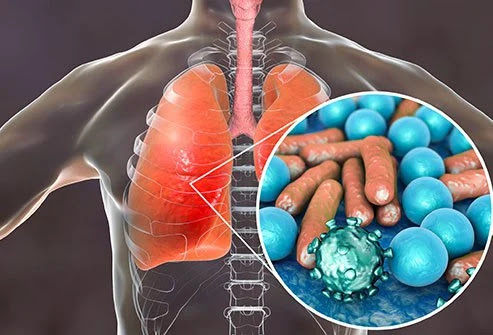 Most episodes are mild and self-limiting, and maybe characterised by cough, wheeze, respiratory distress, and hypoxia.
High-risk groups for severe illness include infants with a history of prematurity, chronic lung disease, complex congenital heart disease, and immune deficit.

RSV is one of the most important pathogens in early childhood and is the most common cause of bronchiolitis and pneumonia in infancy worldwide. [Ref-1]
RSV usually is transmitted by direct or close contact with contaminated secretions, which may occur from exposure to large-particle droplets at short distances (typically <6 feet) or by self-inoculation after touching contaminated surfaces.
One meta-review of 98 studies noted that, prior to the COVID-19 pandemic era, there had been no discernible change in RSV hospitalisations over the past 20 years.
Data suggest that social distancing and other lockdown strategies associated with the pandemic significantly reduced the spread of RSV in the community and led to a large decrease in diagnosed RSV and hospitalization. [Ref-2]
RSV incidence may increase during the off-season and/or with the easing of stringent COVID-19 control measures.
RSV produces significant morbidity and mortality, especially among high-risk infants and those with prematurity, chronic lung disease, complex congenital heart disease, or immune deficit.
Prematurity (<35 weeks), male sex, age < 6 months, birth during the first half of the RSV season, multiple siblings, or daycare exposure have been associated with higher hospitalisation rates.[Ref-3]
In Scotland, a mean of 1976 children per year for the period 2001 to 2003 were admitted to hospital with the principal diagnosis of bronchiolitis.  In the US, RSV accounts for 18% of hospital emergency visits and 20% of admissions to hospital due to acute respiratory infections in children under 5 years of age. Among patients with acute respiratory tract infections in China, RSV accounted for 18.7% (95% CI 17.1% to 20.5%) of infections.
In 2015, a global estimate of 33.1 million (uncertainty range [UR] 21.6-50.3) episodes of RSV-acute lower respiratory infection resulted in about 3.2 million (UR 2.7-3.8) hospital admissions and 59,600 (UR 48,000-74,500) in-hospital deaths in children younger than 5 years. In children younger than 6 months, 1.4 million (UR 1.2-1.7) hospital admissions and 27,300 (UR 20,700-36,200) in-hospital deaths were due to RSV-acute lower respiratory infection.
Seasonal outbreaks occur worldwide during the winter months and continue onto early spring. In the US and throughout the northern hemisphere, epidemics generally begin each November, with a peak in January or February.
Cases then decline over the next 2 months with sporadic cases occurring throughout the remainder of the year. Regional variability also occurs but is less predictable. In the southern hemisphere, seasonal outbreaks occur from May to September.
Tropical regions often have more prolonged circulation in association with the rainy season.
By 2 years of age, nearly all children have been infected with RSV, and half of those have been infected twice.
Long-lasting immunity does not occur, and re-infection is common, usually with diminished severity.

There is increasing recognition of the burden of RSV infection in adults and older people. [Ref-4]
It has been estimated that 3 times more high-risk adults and people over the age of 65 years are admitted to hospital with RSV in the US than children under the age of 5 years.
There is growing literature reporting on the impact of this and other viral disease in long-term care settings, adult day-care centers, and nursing homes.
Although less than 1% of adults affected by RSV are estimated to require hospital care, it is the causative agent in up to 12% of acute respiratory illness requiring medical assistance in the US.
Many physicians caring for adults rarely consider RSV as a cause of respiratory tract illness, and this commonly leads to the overuse of antibiotics.
Risk factors for progression to viral pneumonia and complications from RSV in adults include immunodeficiency (e.g., patients taking chemotherapy or immunotherapy), underlying lung disease (e.g., asthma, tobacco use, COPD), transplant recipients, heart disease, old age, living in a long term care facility, and frailty.
↚

Respiratory syncytial virus is a member of the Pneumoviridae family. The viral particle plasma membrane originates from the host cell and surrounds a nucleocapsid.
The viral genome within the nucleocapsid consists of a single strand of RNA with 10 genes that encode a total of 11 proteins. Two of these direct viral replication, and the remaining 9 function as structural proteins and surface glycoproteins.[34]
RSV has 3 surface glycoproteins: fusion protein (F), small hydrophobic protein (SH), and glycosylated attachment protein (G). The F and G proteins are the primary targets for the host's antibodies and therefore play a prominent role in the pathophysiology of RSV.
The G protein mediates attachment to the host cell, and the F protein facilitates fusion of the host and viral plasma membranes, enabling transit of the viral RNA into the host cell.
The F protein also promotes the aggregation of multi-nucleated cells by fusion of their membranes, resulting in the syncytia for which the virus is named. The role of the SH protein is less clear.

The virus is transmitted by contact with respiratory droplets, with inoculation of the conjunctival or nasopharyngeal mucosa.[35][36] RSV can remain viable on hard surfaces for up to 6 hours.
The incubation period ranges from 2 to 8 days; 4 to 6 days is most common.
Immunocompetent patients shed the virus, on average for between 3 and 8 days, although this can continue for up to 4 weeks especially in young infants and immunosuppressed children. Immune deficient patients may shed the virus for 4 to 6 weeks.
Viral replication begins in the nasal epithelium and then progresses downwards through the bronchiolar epithelium and types 1 and 2 alveolar pneumocytes.[39][40] The viral infection is generally limited to the respiratory tract with extrapulmonary disease rarely reported.
Viral replication results in bronchiolar epithelial necrosis, followed by peribronchiolar T-lymphocytic infiltration and submucosal oedema.[42] There may be a genetic predisposition to severe RSV disease involving mutations to interleukin-4, toll-like receptor 4, and CD14 genes.
Viscous mucous secretions, primarily neutrophilic inflammation, increase in quantity and mix with cellular debris.[45] The loss of ciliated epithelium makes clearance of these secretions difficult. The end result is dense mucous plugging of the narrowed airways, producing wheeze, cough, air trapping, and ventilation/perfusion ratio mismatch.
Respiratory virus co-infections are commonly reported, but their impact on disease severity is unclear. One systematic review and meta-analysis found no association between co-infection with RSV and other viruses and clinical severity, except for co-infection with RSV and RSV-human metapneumovirus, where this was found to be associated with a higher risk of ICU admission.
↚

The suspicion for RSV can generally be entertained based on the season, history, and physical examination. However, numerous viruses cause similar symptoms and have been linked to bronchiolitis.
While a definitive diagnosis can be confirmed only by laboratory testing, this is not routinely recommended.

RSV infection almost always produces symptoms. The severity varies depending on the patient's age, history of previous infection, and comorbidities. [Ref-5]
Clinicians should determine whether the patient is at high risk for developing severe illness, including the following factors:
These patients require closer observation and are frequently admitted to the hospital.

Infants typically present with upper respiratory tract findings such as rhinorrhoea and congestion.
The physician may suspect RSV as the diagnosis when, over the next 2 to 4 days, the lower respiratory tract becomes involved and illness manifests as tachypnoea, cough, wheeze, prolonged expiration, and increased work of breathing.
Signs of moderate illness include:
Physicians should enquire about difficulty with feeding, malaise, and signs of otitis media, as these may also be present.
Apnoea may be the sole presenting finding in very young infants (age <1 month) and may be severe enough to result in death.
Very young infants may also present with sepsis.

RSV disease in older children and healthy adults is typically limited to the upper respiratory tract but may progress to tracheobronchitis.
Symptoms include nasal congestion, ear and sinus involvement, productive cough, and wheezing.
In young adults who are otherwise well, RSV typically presents as an upper respiratory tract infection with mild to moderate symptoms, and only very rarely causes severe disease.
Additionally, healthy children and adults may be asymptomatic facilitating the spread of infection to more vulnerable hosts.
Immune deficit, increasing age, and comorbidity
Older people, people with immune deficit, and those with respiratory or cardiac comorbidity, are at risk of developing severe lower respiratory disease.
Among immune deficient patients, the greatest incidence of RSV infection is seen in patients receiving haematopoietic stem cell transplants and lung transplants (approx 12% to 16% incidence rates). [Ref-7]
Patients with RSV receiving haematopoietic stem cell transplants develop progression from upper to lower respiratory tract infection in 40% to 60% of cases; in these patients, lower respiratory tract infection is associated with mortality rates of up to 80%.
Two scoring systems have been developed to estimate the risk of severe disease and mortality amongst patients with RSV receiving haematopoietic stem cell transplants; these have been proposed as tools to determine need for hospital admission and consideration for antiviral therapy.

Rapid point-of-care tests for the detection of RSV have a sensitivity and specificity of 75% and 99%, respectively. However, the American Academy of Pediatrics (AAP) recommends that the diagnosis of bronchiolitis should be established based on findings in the history and physical examination.
The AAP further recommends that clinicians should not routinely order laboratory or radiographical studies for diagnosis.Likewise, studies in adult populations have not proved to be of benefit.
Nonetheless, confirming the presence of RSV may be advantageous in order to isolate and cohort patients with known infection.
Rapid viral testing has been shown to reduce the number of chest radiographs undertaken in the accident and emergency department, and results suggest a beneficial effect in terms of lowering antibiotic usage, although this was not statistically significant. Large-scale trials are required.
Rapid testing of nasopharyngeal aspirates for RSV is available through immunofluorescence (direct fluorescent antibody staining) and polymerase chain reaction (PCR). Increasing availability and sensitivity of rapid molecular amplification tests may make these the preferred diagnostic modality.
Results of a meta-analysis suggest that the poor sensitivity of RSV rapid antigen detection tests in adults may preclude their use in this population.

Pulse oximetry is readily available in most clinical settings. It is a rapid and accurate method for assessing hypoxaemia. Measuring oxygen saturation using pulse oximetry should be carried out in every baby and child presenting to secondary care with clinical evidence of bronchiolitis.
Disease severity is characterised by the following:
The National Institute for Health and Care Excellence recommends assessing a baby or child in a secondary care setting, and admitting them to hospital if they have any of the following:
- less than 90%, for children aged 6 weeks and over
- less than 92%, for babies under 6 weeks or children of any age with underlying health conditions 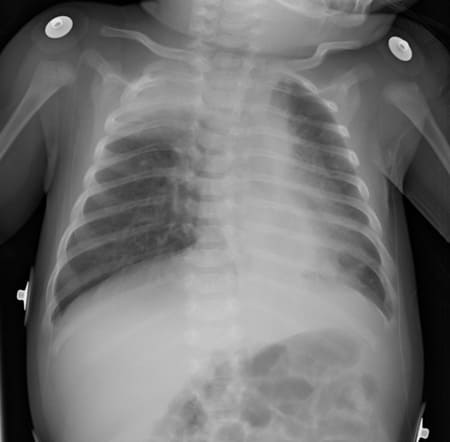 Chest radiograph may reveal atelectasis, hyperexpansion, and peribronchial cuffing.
Interstitial infiltrates are less common.
Chest radiography should be reserved for patients with severe disease, and those who do not improve at the expected rate.
he National Institute for Health and Care Excellence recommends only performing a chest x‑ray if intensive care is being proposed for a baby or child.
A chest x‑ray in babies or children with bronchiolitis may mimic pneumonia and should not be used to determine the need for antibiotics.
Full blood count and serum chemistries are not routinely helpful but may be considered in the presence of severe disease. Blood cultures are indicated if bacterial infection is suspected.
Clinically assess the hydration status of babies and children with bronchiolitis to determine the hydration requirements of the patient.