Dr.Tamer Mobarak
Last update :
Systemic Lupus Erythematosus (SLE)  is one of the most known Auto-immune diseases , and -if uncontrolled- it can cause serious body problems .


Definition and epidemiology of SLE

• It is a systemic connective tissue disorder affecting mainly females .
- female: male ratio (9 : 1) with peak onset in the second and third decade.
• It leads to systemic disorders (extra - articular manifestations), but joint pain is the presenting feature in 50 % of cases.
- Skin rash and arthralgia are common presentations but renal and cerebral diseases are the most serious problems.
- The prevalence varies from 30/100,000 in Caucasians to 200/100,000 in Afro-Caribbeans. 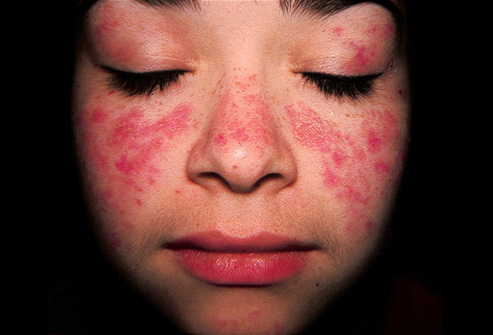 (1) Defect in T. suppressor lymphocytes with exaggerated B cell activity leading to production of auto antibodies to a variety of antigens (nuclear, cytoplasmic and plasma membrane), this will lead to immune complexes with systemic manifestations .
• There is hypergammaglobulinaemia and increased level of IL1, IL2 and IL6 .

(2) Expression of novel or hidden antigens on the cell surface during apoptosis (during apoptosis these antigens migrate to cell surfaces).
This hypothesis is supported by the fact that environmental factors leading to oxidative stress with subsequent increased apoptosis e.g exposure to sunlight and artificial ultra violet light, pregnancy and infection.
The increased apoptosis with expression of antigens triggers T cells that stimulate B cell to produce autoantibodies.
Some contributing factors.
a- Sunlight, artificial ultraviolet light, environmental triggers? as above.

c- Hormonal factor!?
SLE is common in child bearing period, and in those using contraceptive pills.
Exacerbation in pregnancy. - Exacerbation in the puerperium !?
Hormonal (estrogen) replacement therapy may lead to flare-ups.
Estrogen binds to receptors on T and B lymphocytes increasing activation and survival of those cells thus favoring prolonged immune responses .

7- Microscopic changes of tissues in cases of SLE :