Polycystic ovary syndrome (PCOS) is the most common endocrinopathy in women of reproductive age. A leading cause of infertility and pregnancy complications.

Main treatment goals are to reduce hyper-androgenism or to induce fertility. 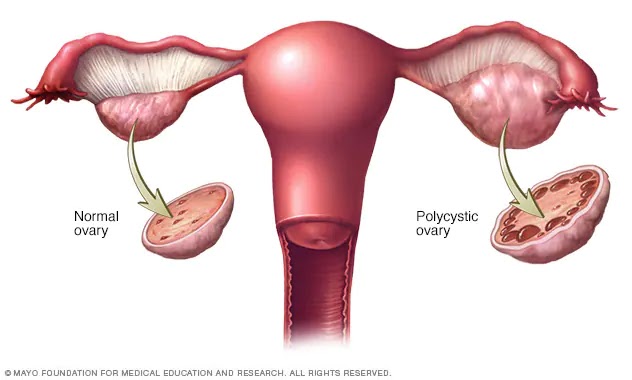 Letrozole and clomifene are considered first-line pharmacological treatments for infertility in PCOS. Increasing evidence suggests that letrozole may be superior to clomifene.

A questionnaire-based study suggested that Mexican-Americans, a group at high risk for insulin resistance and the metabolic syndrome, may have a higher prevalence of PCOS.[13] One small preliminary study suggested a high rate of PCOS in indigenous Australians.[14] There have been no prospective studies that document incidence rates for PCOS.

PCOS accounts for 80% to 90% of cases of hyper-androgenism in women. In one large series of women presenting with androgen excess or ovulatory dysfunction, approximately 80% had PCOS, 3% had the hyper-androgenism-insulin resistance-acanthosis nigricans syndrome, 1.5% had 21-hydroxylase-deficient non-classic adrenal hyperplasia, 0.6% had 21-hydroxylase-deficient classic adrenal hyperplasia, and 0.2% had androgen-secreting tumours.

Men in families with PCOS may have manifestations including excessive hairiness, premature male-pattern baldness, elevated levels of dehydroepiandrosterone sulfate, abnormal hormonal responses to dynamic testing, and aberrations in insulin sensitivity and secretion.

The aetiology of PCOS is unknown. It is a syndrome wherein multiple systems are affected and the site of the primary defect is unclear. Various lines of evidence have supported primary defects in the hypothalamic-pituitary axis, postulating increased amplitude and frequency of pulses of luteinising hormone, or defects involving the ovaries through an intrinsic problem leading to androgen over-production.

PCOS appears to be inherited as a common complex disorder. Multiple genes, each with mild or moderate effects on overall disease risk, are likely to be involved. One twin study calculated the heritability of PCOS at 70%, suggesting that most PCOS risk depends on genetic factors.

The actual PCOS susceptibility genes have yet to be definitively identified. A large genome-wide association study conducted in Chinese individuals robustly identified genetic variants in or near 3 genes (DENND1A, THADA, LHCGR) as risk factors for PCOS.[20] Variation in DENND1A was subsequently associated with PCOS in several European-origin cohorts.

Most loci discovered in one ethnic group appear to affect PCOS risk in other ethnic groups, suggesting an ancient origin of PCOS.

The pathophysiology of PCOS is not well understood, mainly due to lack of knowledge of the location of the primary defect. There are several candidates: ovary, adrenal, hypothalamus, pituitary, or insulin-sensitive tissues. It is possible that there are subsets of women with PCOS wherein each of these proposed mechanisms serves as the primary defect.

Investigations have elucidated some of the interactions between these systems. Insulin resistance leads to compensatory insulin hypersecretion by the pancreas in order to maintain normoglycaemia. The resulting hyperinsulinaemia promotes ovarian androgen output and may also promote adrenal androgen output.

High insulin levels also suppress hepatic production of sex hormone-binding globulin, which exacerbates hyper-androgenaemia by increasing the proportion of free circulating androgens. Another factor that promotes ovarian androgen output is the fact that women with PCOS are exposed long term to high levels of luteinising hormone.

This luteinising hormone excess seems to be a result of an increased frequency of gonadotrophin-releasing hormone pulses from the hypothalamus. The abnormal hormonal milieu may also contribute to incomplete follicular development that results in polycystic ovarian morphology.

There is no formal classification system for PCOS. The following has been proposed:

How to reach a diagnosis in a case of PCOS?

There are no pathognomic features that suggest PCOS, and it is largely a diagnosis of exclusion.

Symptoms typically begin at the time of puberty and, in younger women, may be difficult to distinguish from the irregular menses that often occur in the first year after menarche.

Up to 85% of menses are anovulatory during the first year after menarche, and up to 60% in the third year; increased body mass index is a predictor of persistent anovulation. It has been suggested that all 3 Rotterdam criteria or at least both oligo-ovulation and hyper-androgenism must be present to diagnose PCOS in a teenager.